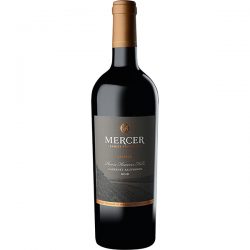 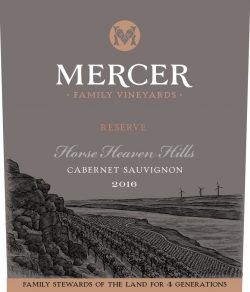 Aromas of ripe blackberries, black current, savory herb, and sweet ripe tobacco are highlighted by barrel spices of vanilla and mesquite. The ripe fruit flavors carry through in the palate with a light touch of acidity. Sleek tannins lead into powdery tannins on the finish.

Mercer Bros. Will and Rob continue the independent spirit of their great grandfather, who settled in remote eastern Washington’s Columbia Valley in 1886 to begin the family farm. In 1972 the third generation Mercers pioneered wine growing in the area, planting on the same land the vines that produced Washington’s first 100-point wines from Robert Parker. The Mercers founded the Horse Heaven Hills AVA, now Washington’s highest scoring appellation for Cabernet Sauvignons. Mercer Bros. wines are predominantly estate grown, including some of Washington’s oldest Cabernet Sauvignon vines dating to 1972.

Its wide prairies and rolling expanses led an early pioneer to proclaim that the region looked like “horse heaven,” and as a result, the area was appropriately named. Horse Heaven Hills is in south central Washington state, geographically bound on its northern border by the Yakima River and in the south, by the larger Columbia River.