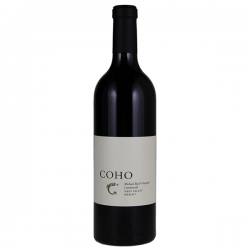 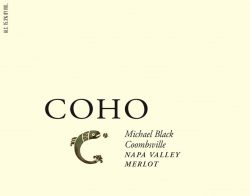 Napa native Michael Black has been a respected viticultralist and vineyard engineer for over 40 years. His resume includes planting many high profile vineyards in both Napa Valley and Sonoma County. In 1987 Michael decided to plant a vineyard on the rocky hillside surrounding his house. Located in Coombsville, the vineyard benefits from the two defining characteristics of the region: cool, marine influenced air and volcanic, well-drained soils. To give the vineyard a personal touch, Michael propagated his own Merlot clone that he named the “Black” Clone. The desired characteristics were small berries set in small clusters, all the better to concentrate the structure and complexity of the fruit. In 2004 COHO was privileged to become associated with the Michael Black Vineyard and began to purchase the entire output. The wines reveal a richness and depth of flavor that is most often associated with the Merlot based wines from the Pomerol region of Bordeaux. Our fans often say “this is a Cabernet lovers Merlot”. Winemaker

Coho is the shared aspiration of Brooks Painter and Gary Lipp to produce flavorful, balanced wines. Grown in select cool-climate vineyards, Coho wines emphasize fruit purity and vitality. Our combined experience working for California wineries totals almost sixty years: both of us involved in all aspects of our craft, acquiring the skills to bottle our passion.

Our choice of Coho as the name of our brand might seem curious as it doesn’t invoke images of vineyards or wine, but to us the salmon embodies an innate wisdom so essential to understanding ourselves and our environment. As stewards of the land winemakers must strive to sustain our habitat and the species that share it. And like the salmon we need the steadfast will to keep going no matter how difficult the journey.

Undoubtedly proving its merit over and over, Napa Valley is a now a leading force in the world of prestigious red wine regions. Though Cabernet Sauvignon dominates Napa Valley, other red varieties certainly thrive here. Important but often overlooked include Merlot and other Bordeaux varieties well-regarded on their own as well as for their blending capacities. Very old vine Zinfandel represents an important historical stronghold for the region and Pinot noir is produced in the cooler southern parts, close to the San Pablo Bay.

Perfectly situated running north to south, the valley acts as a corridor, pulling cool, moist air up from the San Pablo Bay in the evenings during the hot days of the growing season, which leads to even and slow grape ripening. Furthermore the valley claims over 100 soil variations including layers of volcanic, gravel, sand and silt—a combination excellent for world-class red wine production.