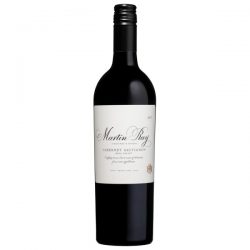 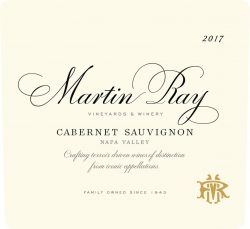 Pair this wine alongside blackened hangar steak with chimichurri sauce.

JS93 James Suckling
This is very ripe with lots of intense fruit. Hints of walnuts. Toasted. Turns to dried flowers. Medium to full body. Lots of mountain tannins. Flavorful finish with freshness. Drink or hold.
One of the most prestigious wines of the world capable of great power and grace, Napa Valley Cabernet is a leading force in the world of fine, famous, collectible red wines. Today the Napa Valley and Cabernet Sauvignon are so intrinsically linked that it is difficult to discuss one without the other. But it wasn’t until the 1970s that this marriage came to light; sudden international recognition rained upon Napa with the victory of the Stag’s Leap Wine Cellars 1973 Cabernet Sauvignon in the 1976 Judgement of Paris
Courtney Benham acquired the historic Martini & Prati winery in July 2003, which is now Martin Ray Winery and the home of their new tasting room. The tasting room structure, dating back to the 1900’s, used to serve as a stable and bunkhouse where Italian immigrants stayed during harvest and crush. The winery also houses a 1 million gallon production facility that is used not only for wine production, but also as a ‘custom crush’ facility where over 20 clients crush their grapes and produce their wine.

Established in 1881 as the Twin Fir Winery, the historic site is distinguished as the oldest winery in continuous operation in Sonoma County and one of the oldest wineries in California. The winery was able to stay in operation during prohibition by selling sacramental wines by train to Rabbis through a winery in New York.