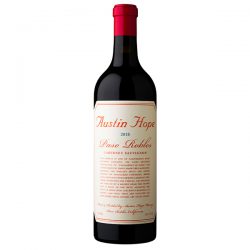 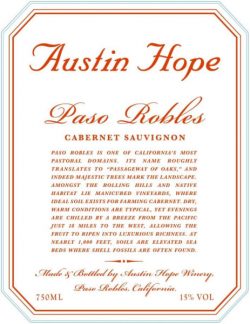 Caymus Clone for $30 Less a Bottle!

Austin Hope grew up working alongside his father, inheriting his love and respect for the region. He led the family’s move into winemaking in 1995, and further exploration of Paso began. In 2000, Austin created the Austin Hope label, making very small productions of Rhône varietals. These wines are produced from vines grown at the family’s estate property, where soils and climate have similarities with Rhône Valley vineyards. They remain small yet extraordinary productions. Each bottling holds onto a unique intensity and softness, expressing a special side of Paso.

Today, Austin is showcasing an even greater sweep of the Paso region and expressing a similar richness with a recently released Cabernet Sauvignon. The source of the wine is far-reaching within the appellation – a most discerning group of vineyards located on gently sloping hillsides and hidden pockets across the domain, providing dimension to the Cabernet varietal. The wine has a bold structure of lush, velvety tannins and an unmistakable elegance. It is dark, ripe and eminently enjoyable.

AUSTIN HOPE   from  Paso Robles, California has soared in number of wineries and gained in popularity, Cabernet Sauvignon has firmly taken root as the region’s number one varietal. Alone, it accounts for just over 40% of plantings and is grown throughout both the western and eastern sides of the appellation. Though viticulture here dates back to the 18th century, Cabernet Sauvignon didn’t emerge as a significant grape here until the 1970’s. But since then it has definitely made up for lost time.

The results are evident in the glass. Paso Robles Cabernet Sauvignon can be mesmerizing, with rich aromas and flavors of blackberry, cassis, black cherry, graphite, toasty oak, vanilla and spice. The structure, balance and unbridled opulence of these wines impress from first sip to last. Not surprisingly, Paso Robles Cabernet Sauvignons have steadily grown in reputation, not just in the U.S., but around the world.