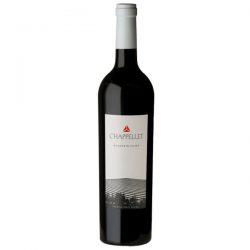 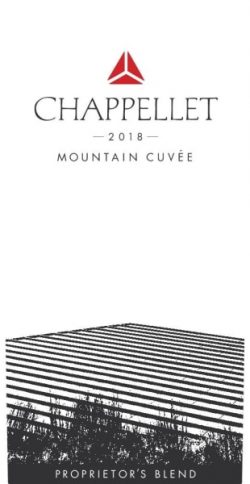 Blended from the traditional Bordeaux varietals, including our own coveted grapes, the Chappellet Mountain Cuvee Proprietor’s Blend builds on our five decades of experience crafting great Napa County mountain-grown wines. Each component varietal in the cuvee contributes to nuances that complement each other. The result is a complex array of aromas and flavors that deliver pure pleasure in a glass. Made for near-term enjoyment, this is the wine to choose when you’re looking for vivid, mouth filling fruit flavors.

Alluring dark and spicy, this wine displays beautiful aromas of currant, cassis, sage and thyme, as well as hints of cinnamon and clove from barrel aging. On the palate, the tannins are impeccably balanced, adding depth to the lush ripe berry flavors, with layers of cola and grenadine emerging as the wine evolves in the glass. 44% Cabernet Sauvignon, 33% Merlot, 10% Malbec, 8% Petite Verdot, 5% Cabernet Franc.

Chappellet is one of the greatest producers of Cabernet in Napa. They are in one of the sweet spots of the region, a sub appellation called Pritchard Hill, which is the Garden of Eden for Cabernet Sauvignon.  It is located up the Silverado Trail off of the famous Highway 28 and is one of the most picturesque locations in all of California, sitting right above the shimmering surface of Lake Hennessey.  The top Pritchard Hill wineries and their top bottlings are not for the faint of heart or the impatient.  Blue chip producers like Colgin, the Mondavi Family’s Continuum, Ovid, Gandona, and Bryant all carry intro level prices of $300 a bottle, skyrocket up from there to $600+ a bottle and typically go for much more at auction.  They are some of the longest lived, age worthy red wine in the entire world, held in the same regard as First Growth Bordeaux, Grand Cru Burgundy, Barolo, Barbaresco and Brunello.  If you don’t have these in your wine collection, it is not a collection.

Chappellet’s Pritchard Hill Cabernet stands at the top of the pile because of its trailblazing inception.  Back in the 1960’s, Donn and Molly Chappellet purchased the undeveloped estate with the approval and guidance of the Maestro of Napa, the legendary Andre Tchelistcheff, who helped all the famous winegrowing families establish their roots.  Back then, it was unplanted land with Chappellets being the only family willing to invest in this high elevation oasis.  It ended up being the best business decision they ever made, and as their reputation grew they began to attract a carousel of talented winemakers like Phillip Togni, Tony Soter, Cathy Corison and the great Helen Turley.  In 1990, Phil Titus took over as winemaker and has guided the estate to two 100-pt wines and a profusion of 97+ scores.  This is press that solidify a winery’s excellence, and Titus and Chappellet make it a regular occurrence.  Since then, Chappellet remains one of the most sought after blue chip Cabernets in the world.

Now for the reveal: Chappellet’s Pritchard Hill Cabernet sells for just under $300 a bottle, but what many don’t know is that they make an insider value that is one of the best kept secrets in Napa. The wine is the 2018 Chappellet Proprietors Mountain Cuvee that can be had for $33.99 PLUS FREE CASE SHIPPING and is an absolute steal for Napa Cab. This is a definite case buy.  Value and quality when it comes to Napa Cab don’t mix. It’s like oil and water. This wine however offers serious quality at a killer price. The wine is from the “buy” vintage of 2018, the wine experts are comparing 2018 while not rated yet as a vintage, to the great 2012 vintage, 96pt vintage by Parker’s Wine Advocate and was a great vintage because combined two of wines great traits. It combined great drinkability and approachableness with the ability to cellar superbly great age-ability.