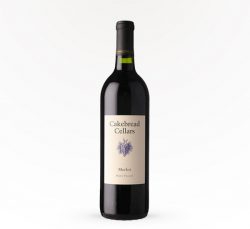 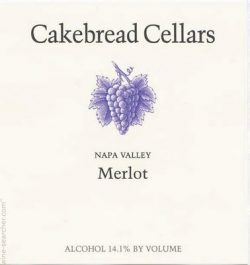 Fragrant aromas of ripe black cherry, plum compote, blackcurrant and herbal spice introduce the lush red and black cherry, raspberry, and black plum flavors of this remarkably sumptuous merlot. Mouth-filling and deeply concentrated on the palate, it is perfectly balanced by bright acidity and supple, fine-grained tannins, culminating in a long, spicy, cherry-laced finish. Enjoy this delicious merlot now or age it another 5-7 years to fully savor its developing complexity.

Napa Valley, an hour’s drive north of San Francisco, California, is the most famous and prestigious wine region anywhere in the New World. Cakebread Cellars, in the Rutherford AVA of Napa Valley, is one of the best-known family-owned and operated producers in California. It is best known for wines made from Chardonnay and Cabernet Sauvignon and it is one of the most popular names on U.S. restaurant winelists.

Founded in 1973 by Jack and Dolores Cakebread, it was expanded in 1982 through the purchase of adjacent land. Cakebread now has 15 estate vineyards, considered the optimal size, and has not grown any more since 2005. The winery produces around 175,000 cases a year.

Cakebread’s flagship wines are the Napa Chardonnay and Howell Mountain Cabernet Sauvignon, but there is also a range of single-vineyard and estate wines. These include an Anderson Valley AVA Pinot Noir and a Napa Valley Sauvignon Blanc. In 2008, the winery became Napa Green Certified, as well as being a part of the Napa River Restoration Project.

The goal in the vineyard is to get fully ripe grapes, but with a lower value Brix to ensure a more restrained style of wine than Napa is famous for. The Chardonnay is 90-percent barrel-fermented, with roughly one-third of that taking place in new oak. only 10 percent is allowed to go through malolactic fermentation.