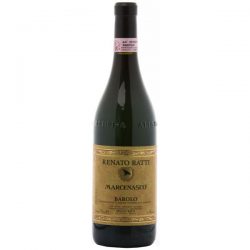 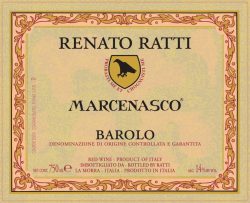 Garnet red. A bouquet with traces of licorice and tobacco. Full flavored, full-bodied and elegant.

WE96 Wine Enthusiast
Enticing scents of ripe wild berry, star anise, menthol and fragrant blue flower mingle with whiffs of camphor and espresso. The smooth, precise palate offers crushed raspberry, Marasca cherry, licorice and dried botanical herbs alongside fine-grained tannins. Fresh acidity lifts the finish. Enjoy through 2027.
The center of the production of the world’s most exclusive and age-worthy red wines made from Nebbiolo, the Barolo region includes five core townships: La Morra, Monforte d’Alba, Serralunga d’Alba, Castiglione Falletto and the Barolo village itself, as well as a few outlying villages. The landscape of Barolo, characterized by prominent and castle-topped hills, is full of history and romance centered on the Nebbiolo grape. Its wines, with the signature “tar and roses” aromas, have a deceptively light garnet color but full presence on the palate and plenty of tannins and acidity. In a well-made Barolo, one can expect to find complexity and good evolution with notes of, for example, strawberry, cherry, plum, leather, truffle, anise, fresh and dried herbs, tobacco and violets.
Responsible for some of the most elegant and age-worthy wines in the world, Nebbiolo, named for the ubiquitous autumnal fog (called nebbia in Italian), is the star variety of northern Italy’s Piedmont region. Grown throughout the area, as well as in the neighboring Valle d’Aosta and Valtellina, it reaches its highest potential in the Piedmontese villages of Barolo, Barbaresco and Roero.
From the 100 acres of vineyards, the Renato Ratti winery produces around 150,000 bottles from the traditional denominations of the area: Barolo, Nebbiolo d’Alba, Barbera d’Alba, Dolcetto d’Alba.
The modern and innovative philosophy of vinification introduced since the 60’s by Renato Ratti, is today in the hands of his son Pietro and his nephew Massimo Martinelli.