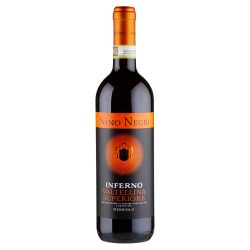 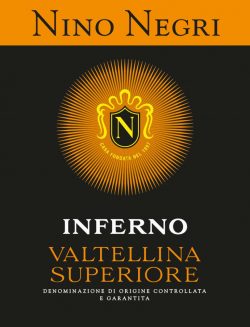 Inferno is deep garnet in color with a well pronounced perfume of spice, dried flowers, plum and jam. On the palate the wine is full-bodied and dry with elegant notes of berry, herb, cedar-spice.

Established in 1897, Nino Negri is the premier estate producing wine in the Valtellina DOCG in Italy’s Lombardy region. The estate specialty is Sfursat (“strained” or “forced”); a wine made from grapes harvested by trained pickers and dried for 100 days in the cool, dry, alpine air. This winemaking style combines the opulence of Amarone with the elegant complexity of Barolo. The success of Nino Negri is due largely to the efforts of winemaker Casimiro Maule who has worked at the estate since 1971, his entire professional life. In 2007, Casimiro was named “Winemaker of the Year” by Gambero Rosso, the magazine authority in Italian wine. Nino Negri controls almost 400 acres of the finest Chiavennasca vineyards in the Valtellina Superiore subzones. The estate directly owns 75 acres of exceptional vineyards, including the 27 acre Fracia vineyard, an exclusive cru planted since 1995 to special clonal selections.The vine stocks that are cultivated horizontally from west to east, an innovated planting scheme for this region. The winery is located in the city of Chiuro in the 15th Century Quadrio Castle. The “castle” sits above an array of underground cellars which house thousands of barrels. All Nino Negri wines age for at least two years before they are released to ensure optimum maturity at time of bottling.

Containing an exciting mix of wine producing subregions, Lombardy is Italy’s largest in size and population. Good quality Pinot noir, Bonarda and Barbera have elevated the reputation of the plains of Oltrepò Pavese. To its northeast in the Alps, Valtellina is the source of Italy’s best Nebbiolo wines outside of Piedmont. Often missed in the shadow of Prosecco, Franciacorta produces collectively Italy’s best Champagne style wines, and for the fun and less serious bubbly, find Lambrusco Mantovano around the city of Mantua. Lugana, a dry white with a devoted following, is produced to the southwest of Lake Garda.