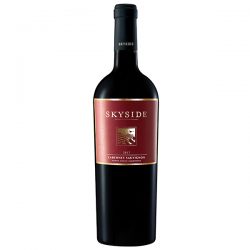 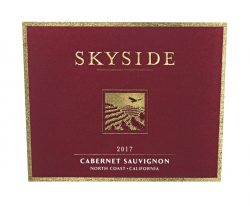 2017 Newton Skyside Cabernet Sauvignon is made to embody California. It is bold, supple and nuanced. For the 2017 vintage, Skyside looked for a structure-oriented wine that retained balance from start to finish. Aromas of violets, blueberry and plum fruits, clove/anise spices, coffee and chocolate. The wine fills the palate and lingers with chocolate and darker fruits meeting the bold tannins to linger.This wine pairs well with a wide variety of meals including grilled pork tenderloin, BBQ short ribs and slow roasted pot roast.Blend: 76% Cabernet Sauvignon, 15% Merlot, 6% Syrah, 3% Petite Syrah

A noble variety bestowed with both power and concentration, Cabernet Sauvignon enjoys success all over the globe, its best examples showing potential to age beautifully for decades. Cabernet Sauvignon flourishes in Bordeaux’s Medoc where it is often blended with Merlot and smaller amounts of some combination of Cabernet Franc, Malbec and Petit Verdot. In the Napa Valley, ‘Cab’ is responsible for some of the world’s most prestigious, age-worthy and sought-after “cult” wines. Somm Secret—DNA profiling in 1997 revealed that Cabernet Sauvignon was born from a spontaneous crossing of Cabernet Franc and Sauvignon Blanc in 17th century southwest France.

Reaching up California’s coastline and into its valleys north of San Francisco, the North Coast AVA includes six counties: Marin, Solano, Napa, Sonoma, Mendocino and Lake. While Napa and Sonoma enjoy most of the glory, the rest produce no shortage of quality wines in an intriguing and diverse range of styles.

Skyside carries over 40 years of rich winemaking experience in the Napa Valley, imbued with California golden spirit. This heritage makes them true experts in identifying the best terroirs and gives them wings to source the highest quality grapes from all Northern California for their Chardonnay, Cabernet Sauvignon and Red Blend.