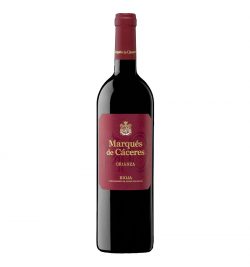 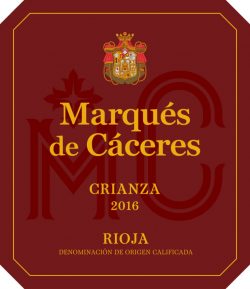 2017 Marques de Caceres Rioja Crianza is based on fruit from its home base in Cenicero, but also includes grapes from the rest of the Rioja Alta and a lesser amount from the Rioja Alavesa. Floral, fresh and well balanced, with deftly handled French and American oak sweetness, fresh acidity and some tannic bite from 10% Graciano and Mazuelo.

In 1970, Enrique Forner founded Marqués de Cáceres Unión Vitivinícola S.A., a historic alliance of growers in the village of Cenicero in the Rioja Alta subregion of Rioja. The enterprising Forner family has been devoted to the wine trade for five generations. Their search for the best vine growers and vineyards in Rioja and the introduction of a Bordeaux concept revolutionized the production and business model of the region. They work with one single objective: producing the highest quality wines. Today this obsession continues to be the leitmotif of Cristina Forner, the fifth generation of this distinguished wine family.

Hailed as the star red variety in Spain’s most celebrated wine region, Tempranillo from Rioja, or simply labeled, “Rioja,” produces elegant wines with complex notes of red and black fruit, crushed rock, leather, toast and tobacco, whose best examples are fully capable of decades of improvement in the cellar.

Rioja wines are typically a blend of fruit from its three sub-regions: Rioja Alta, Rioja Alavesa and Rioja Oriental, although specific sub-region (zonas), village (municipios) and vineyard (viñedo singular) wines can now be labeled. Rioja Alta and Alavesa, at the highest elevations, are considered to be the source of the brightest, most elegant fruit, while grapes from the warmer and drier, Rioja Oriental, produce wines with deep color, great body and richness.