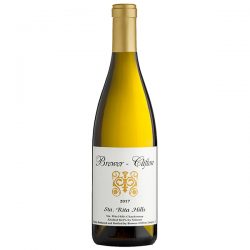 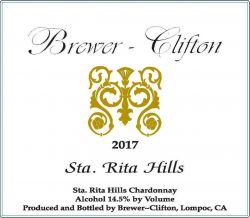 An assembly of each of the blocks and clones from their estate holdings within the Sta. Rita Hills, each of which raised in the exact same fashion without bias or prejudice. Barrel fermented in completely neutral cooperage (10-20 years old), with neither lees disturbance or malo-lactic.

Sta. Rita Hills regularly demonstrates citrus aromatics of lemon-lime matched with tremendous salinity reminiscent of a deconstructed margarita. Amazingly diverse food affinity as the wine serves the role of humble condiment to food in much the same way that citrus and salt do to lift, elevate and to make the food ultimately taste more like the food itself. Vegan

JD95 Jeb Dunnuck
One of the great values out there, the 2017 Chardonnay Sta. Rita Hills offers thrilling notes of white flowers, white peach, currants, and toasted bread. This ripe, sexy wine is unquestionably at the same level as the more expensive single vineyard releases, and it will evolve for just as long.
WE93 Wine Enthusiast
This appellation blend carries that aromatic hallmark of this winery’s Chardonnays, with a streak of walnut oil that decorates the marmalade and toast tones. The palate is bright in acidity, giving energy to the flavors of walnut paste, dried orange peel and sun-dried honeysuckle.
While grounded in traditional ideals matched with extensive studies in Europe, the wines at Brewer-Clifton do not feel the necessity to be fettered by them. Instead, the vintners elect to employ the most sincere and vulnerable wine production practices so as to reinterpret classicism within the aesthetic of the Sta. Rita Hills.They do not strive to emulate any other producer or any other region as they follow their own pursuit. Brewer-Clifton has espoused itself to the appellation and will continue to do everything possible display and celebrate it in as honest and impactful manner possible.