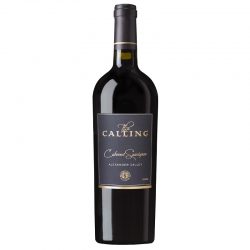 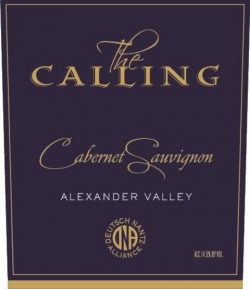 Char and oak introduce the nose and palate to this broad, likable and approachable red, brimming in black cherry and blackberry. There’s a touch of dried herb and sage on the finish.

The Alexander Valley consists of a broad valley floor bisected by the Russian River. It is surrounded by hills that block the coastal fog, keeping the region warmer than most of its neighbors. This climate, combined with well-drained, gravelly soils, help the Alexander Valley produce some of the finest Cabernet Sauvignon grapes available.

Jim Nantz, famed CBS sports commentator, and Peter Deutsch, founder and CEO of Deutsch Family Wine & Spirits, have created a portfolio of classic Sonoma wines from some of the most respected vineyards in the region.

The Calling wines are now quality standards for the Sonoma region with more than fifty 90+ ratings since the first vintage in 2012. Each region and vineyard site were chosen carefully for the vines that were planted and the style of wine produced. These wines are a true testament to the greatness that is possible when you follow your calling in life.

Nearly a northern extension of Napa Valley, Alexander Valley starts just north of the small, Knights Valley, and is just a few minutes drive from the Napa town of Calistoga. It is Sonoma County’s hottest AVA. But the Russian River, which runs through the valley, creates cooler pockets and its soft, alluvial soil is ideal for grape growing, especially Cabernet Sauvignon. In fact, some believe that Alexander Valley Cabernets truly rival the best from Napa Valley and many of the heavy-hitter producers have largely invested here.

In addition to Cabernet Sauvignon, which makes up over 50% of plantings, Merlot and old vine Zinfandel thrive here. Ample, fleshy Chardonnay and Sauvignon Blanc dominate white wine production. Some old-vine plantings of Grenache have also been discovered and more recent experiments with Sangiovese and Barbera show great promise.