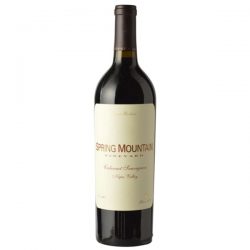 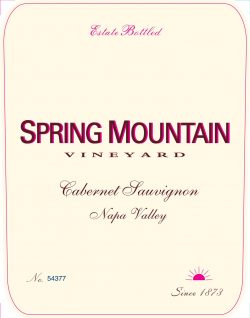 Winemaker Notes; This vintage is showing the classic characteristics of Spring Mountain. On the nose this young Cabernet shows cedar, cassis and bay leaf interwoven violets and white peppercorn. The palate presents notes of blackberry bramble, plum and cocoa integrated with a layer of bright red fruits and hints of thyme and sage. A strong smooth backbone of oak and tannin balance out the fruit providing for long term aging of 15+ years.

Features black currant, blackberry and boysenberry reduction flavors that are tightly coiled for now, carried by well-embedded acidity and racy graphite notes. The long finish pumps out fruit, with extra anise and sweet tobacco elements checking in. This should evolve well in the cellar. Best from 2022 through 2040

A noble variety bestowed with both power and concentration, Cabernet Sauvignon enjoys success all over the globe, its best examples showing potential to age beautifully for decades. Cabernet Sauvignon flourishes in Bordeaux’s Medoc where it is often blended with Merlot and smaller amounts of some combination of Cabernet Franc, Malbec and Petit Verdot. In the Napa Valley, ‘Cab’ is responsible for some of the world’s most prestigious, age-worthy and sought-after “cult” wines. Somm Secret—DNA profiling in 1997 revealed that Cabernet Sauvignon was born from a spontaneous crossing of Cabernet Franc and Sauvignon Blanc in 17th century southwest France.

Above the town of St. Helena on the eastern slopes of the Mayacamas Mountains sits the Spring Mountain District.

A dynamic region, its vineyards, cut by numerous springs and streams, vary in elevation, slope and aspect. Soils differ throughout with over 20 distinct types inside of the 8,600 acres that define the appellation. Within that area, only about 1,000 are planted to vineyards. Predominantly farmed by small, independent producers, the region currently has just over 30 wineries.