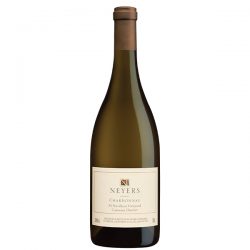 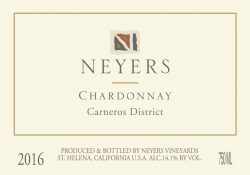 2016 Neyers Chardonnay Carneros One of the most popular and versatile white wine grapes, Chardonnay offers a wide range of flavors and styles depending on where it is grown and how it is made. While it tends to flourish in most environments, Chardonnay from its Burgundian homeland produces some of the most remarkable and longest lived examples. California produces both oaky, buttery styles and leaner, European-inspired wines. Somm Secret—The Burgundian subregion of Chablis, while typically using older oak barrels, produces a bright style similar to the unoaked style. Anyone who doesn’t like oaky Chardonnay would likely enjoy Chablis.

The grapes are whole-cluster pressed, and fermentation was carried out in a mixture of new and used French oak barrels, using native, wild yeast, and periodic lees stirring. Malolactic fermentation also occurs naturally, without the addition of an artificial starter. The additional contact with the yeast lees after barrel fermentation results in a lovely aroma that the French call “Noisette” after the hazelnut character it resembles. The wine is smooth and luscious, and is enormously attractive, especially in its youth.

In 1999, Bruce and Barbara Neyers purchased and renovated a winery on a thirty-acre parcel in the Sage Canyon area of Napa Valley. Over the next 14 months they built a modern, highly functional winery designed for traditional winemaking practices. They produced their first vintage in this state of the art facility in 2000. In 2002, Wine and Spirits Magazine named Neyers Vineyards the Artisan Winery of the Year.

About 25% of our production is Merlot and Cabernet Sauvignon grown on Bruce and Barbara’s 50-acre, Conn Valley ranch. They purchase additional grapes from a select group of growers, among them the Sangiacomo family of the Carneros District, Will Nord of Napa, the Rossi Ranch of Sonoma County, Markus Bokisch and the Evangelho family.