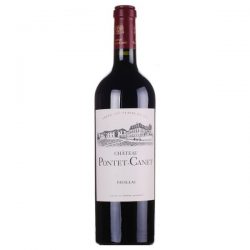 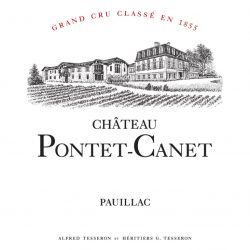 What strikes the taster immediately is the energy these wines display, the expression of tension and intensity: they are bright and brilliant, as though freed of any constraint. Their internal balance combines contained power, uncommon precision of fruit and undeniable class. They seduce by their full-bodied fruit, the finesse of their mouthfeel and their natural elegance, delivering a natural emotion which enhances their seductive charm.

WE100 Wine Enthusiast; A voluptuous wine, this is rich and fruity yet properly balanced by a magnificent structure. Pure, crisp and packed with a black currant flavor, this will be a remarkable wine as it develops. Still young, it needs many years to develop. Don’t think about drinking before 2025.

Jean Francois Pontet, Royal Master of the Horse in the early 18th Century, bought and consolidated several plots of land located northwest of Pauillac. Several years later, in 1750, his descendants bought neighboring vineyards in an area named “Canet”, thus creating one of the largest estates in the entire Medoc. Chateau Pontet-Canet’s topography and soil predestined it to produce great wine.In 1865, the noted wine shipper Hermann Cruse acquired the chateau and its 120 hectares of vones. The Cruse dynasty provided the financial means to make one of the greatest wines in the Medoc. In 1975, Guy Tesseron, solidly implanted in the Cognac region, and owner of Lafon Rochet in St-Estephe, purchsed Pontet-Canet.

The family’s avowed ambition is to pass on the history of Chateau Pontet-Canet and secure its future. Today, it is Guy Tesseron’s descendants who own the estate today: Alfred and his nieces Mélanie and Philippine, daughters of his late brother Gérard. Together, they have the same outlook. Alfred shares his vision of the estate with Mélanie, passing on to her its traditions, his outlook on vine growing and his passion for wine.