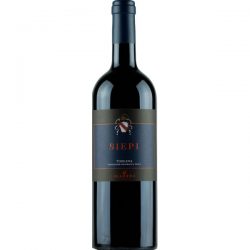 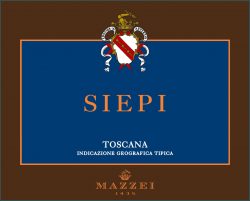 2016 Castello di Fonterutoli Mazzei Siepi – What a beautiful nose of elderberries, freshly picked blackcurrants, citrus, herbs, licorice and crushed stones, amidst a backdrop of coffee beans, cedar and vanilla. Full-bodied and very subtle and refined with tightly wound tannins and an impressive balance of fruit and acidity. Long, grainy and elegant on the finish. A masterpiece. Drink in 2020. Suckling.
The 2016 Siepi is a luscious and soft wine that oozes forth with dark berry intensity. The fruit is compact and dense. This wine performs beautifully in terms of aromas, but the mouthfeel is especially fine-tuned and elegant in this classic vintage. Dark fruit is followed by spice, tar, rose bud and sharp mineral nuances that recall the gravel and limestone-rich soils of Chianti Classico. This is perhaps the best vintage of Siepi I have tasted thus far. Parker’s WA

This is one of the hardest to get great single vineyard Super Tuscans that absolutely crushed it in the classic 2016 that must not be missed. 2016 Super Tuscans are going down as some of the finest ever. Suckling has declared the vintage outstanding and Galloni has called the vintage great. The wine is the 2016 Castello di Fonterutoli Mazzei Siepi, Gambero Rosso has called Siepi “one of the fifty wines that changed Italy.” indicates clearly the esteem in which Siepi is held by Italian connoisseurs. Suckling called the 2016 Siepi and ‘a masterpiece’. Robert Parker said about Siepi, “this wine could easily compete with a first-growth Bordeaux.”  Fonterutoli is rich with history. It was acquired by the famous Mazzei family in 1435. Ser Lapo Mazzei is the author of the first known document to use the “Chianti” denomination in 1398; in 1435, when his granddaughter Madonna Smeralda Mazzei married Piero di Agnolo da Fonterutoli, the holding became part of the family’s estate. Since then, for 24 generations, the Mazzei family produces wine at Castello di Fonterutoli.

Philip Mazzei, who enjoyed calling himself a “Citizen of the World”, befriended Franklin, Adams, Washington, and Jefferson; the latter invited him to introduce vine growing in Monticello, Virginia. In a letter to George Washington, Mazzei writes that the soil and climate of that region are wonderfully suitable for wine production. Filippo inspired Jefferson with the idea that “All men are by nature equally free and independent. Such equality is necessary in order to create a free government”. In his book A Nation of Immigrants, John F. Kennedy himself acknowledges that “The great doctrine ‘All men are created equal’, incorporated in the Declaration of Independence by Thomas Jefferson, was paraphrased from the writings of Filippo Mazzei, an Italian patriot and dear friend of Jefferson”. In 1980 for the 250th anniversary of his birth, Philip Mazzei is commemorated as an “American Patriot” with a stamp issued by the U.S. Postal Service.

The great single vineyard of Siepi is located in the county of Castellina. The soil is characterized by clay-rich with the presence of marly limestone and calciferous sandstone and is truly one of Italy’s greatest vineyards. In a document stored in the family archive at Fonterutoli, Siepi was already listed among the properties of Madonna Smeralda Mazzei in 1435; this is certainly one of the oldest vineyards in Italy.

The great Carlo Ferrini consults, possibly Tuscans greatest winemaker, also makes Oreno, Casanova di Neri,  Petrolo, La Massa, Brancaia and Brolio. Siepi is one of the greats, gets massive press in top vintages. Siepi is a monumental wine with towering intensity and opulent aromas of spice, leather and chocolate covered cherry. The texture of this hearty blend is infinitely soft and supple. A definite collector piece and a wine for the ages. I could only secure 10 cases! I was blown away by this wine.