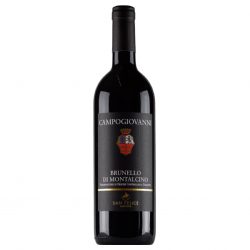 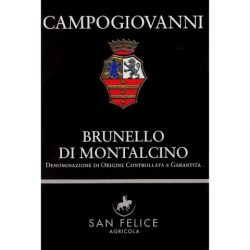 Campogiovanni is an estate run by San Felice in Chianti Classico, and its 2015 Brunello di Montalcino Campogiovanni is a lovely, dark and savory wine to serve with a platter of fatty charcuterie and aged tomme cheese. The bouquet is elegant and linear, showing a pretty ensemble of dark fruit, cassis and dried cherry. This vintage is particularly well balanced, with soft spice and crisp acidity competing for your attention and keeping things bright and interesting.

Agricola San Felice is steeped in local lore and history. Named after a local early Christian Saint from the 18th century, the property was bought by the Grisaldi Del Taja family – the founding members of the Chianti Classico consortium. The family produced wine for several centuries until 1968 when the estate passed to Enzo Morganti. Prior to assuming control, Enzo Morganti spent two decades researching and experimenting with Sangiovese clones at Tenuta di Lilliano. At San Felice, he restructured and transformed this venerable estate, concentrating on high quality winemaking, systematic scientific research and thoughtful vineyard purchases, which included the Campogiovanni vineyard in Montalcino in 1984. Today the property includes a 1,853 acre resort, 445 acres of vineyards and a 44 acre parcel dedicated to experimental viticulture and genetic improvement of Sangiovese,

The San Felice vineyards are situated amongst the gently rolling hills of the Castelnuovo Berardenga area of Chianti Classico. The vines are planted in two different soil types: calcareous clay and a combination of sand and lime. The terroir of Campogiovanni, including its sandy, mineral-rich argillous soil, allows Sangiovese vines to grow slowly and steadily, therefore producing unusually complete and balanced grapes. In addition to indigenous varietals like Toscana’s classic Sangiovese, San Felice has plantings of international varieties such as Cabernet Sauvignon, Chardonnay and Sauvignon Blanc. Like Enzo, winemaker Leonardo Bellacini has spent much of his career working with Sangiovese carries on the legacy of tradition and research and experimentation.