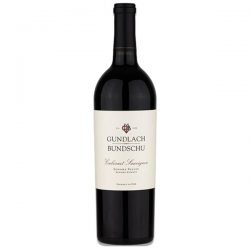 2015 Gundlach Bundschu Cabernet Sauvignon – Use code SAVE for free shipping

Embracing the concentration of the 2015 vintage from whence it comes, this Cabernet Sauvignon is dense, powerful, and compact. The long growing season engendered by our cool climate Sonoma vineyard means this Cab did not have to sacrifice acidity and freshness, however. Classic aromas of blackberries and black raspberry liquor are layered with sweet barrel oak and menthol. Mouth-filling, but more medium than full bodied, savory flavors of cacao nibs, dark fruits, and dried herbs are carried on the lush texture through an enduring finish. Blend: 89% Cabernet Sauvignon 5% Petit Verdot 3% Malbec 2% Merlot 1% Cabernet.

Gundlach Bundschu Winery is a family-owned, sixth-generation producer of distinctive wines of site-specific character. The winery’s 320-acre Estate Vineyard, christened Rhinefarm in 1858, is located at the crossroads of the Sonoma Valley, Carneros and Napa Valley AVAs, at the base of the Mayacamas Mountain Range.

Gundlach Bundschu approaches its vineyards, wines, business and the world with spirit, creativity and dedication to excellence. When you open a bottle of Gundlach Bundschu, you uncork not only the Estate’s unique ability to produce profound wines, but also a rich, personal relationship between the Gundlach Bundschu family and the land on which the family lives.