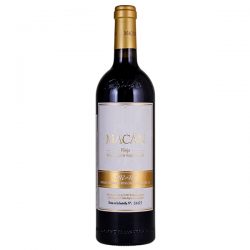 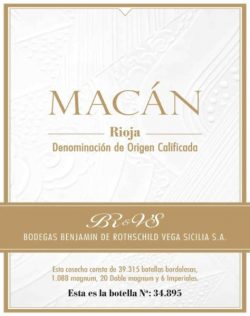 2015 Benjamin de Rothschild & Vega Sicilia Macan – Macán Clásico is deeply attached to its territory, Rioja San Vicente de la Sonsierra compiling centuries of tradition, knowledge and winegrowing culture from the foothills of Sierra de Cantabria. It expresses freshness, fruitiness and delicacy coming from its terroir which provides depth and complexity. Macán Clásico 2016 offers the purest expression of Rioja’s Tempranillo. It’s a fresh wine, but at the same time serious, with persistence and depth.

93 Robert Parker’s Wine Advocate
The entry level here is the 2015 Macán Clásico, pure Tempranillo from their 92 hectares of vineyards in the villages of Ábalos, Labastida, El Villar and San Vicente de la Sonsierra. It fermented in stainless steel after a cold soak, followed by malolactic partly in barriques and an élevage of 12 to 14 months in new and second use French oak barrels. This is the last vintage that was fermented in the old winery, but it has already finished its élevage in the new winery. They have much better facilities now, and they feel they have more precision from 2016 onward, as they have a great diversity of fermentation vessels; they have introduced 4,000-liter oak vats, and they can also treat the press wine separately. 2015 is a riper and warmer vintage, but they harvested quite early to find balance and avoid over-ripeness. It’s clean, modern and balanced, with integrated oak and the classical berry flavors with a spicy twist. The palate is medium to full-bodied, with some grainy tannins and enough elegance to counterbalance the natural power. I would say it’s a very successful 2015, a vintage that is overdelivering in many cases.