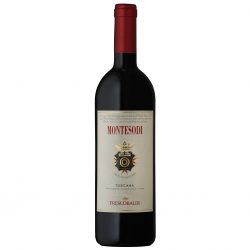 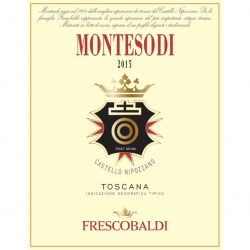 2013 Frescobaldi Montesodi Castello Nipozzano,intensely ruby red in color, surprises with its balance between the floral violet notes and the fresh and balsamic ones. Also present are notes of bergamot and bitter candied orange. In the mouth the wine is fresh, complex and balanced. The tannins blend well with the body resulting in a wine that is velvety to the palate. The acidic component is noteworthy and joins elegantly with the alcoholic content. The finish is highlighted by mixed berries such as blackberry and raspberry with an added light liquorish note. Outstanding with grilled meats, and the ideal partner to bistecca alla fiorentina.This is the third year that this wine is an IGT Toscana (and no longer a Chianti Rufina). The 2013 Montesodi is a solid and well-constructed red wine with dark berry fruit, cassis and spice offered with seamless integration. The wine is sturdy, but never heavy, and it offers a generous taste of Tuscany yet with a certain level of timid reserve. The effect is very inviting. WS.Frescobaldi’s story is strictly connected with the history of Tuscany. At the high point of medieval Florence, the Frescobaldis spread their influence as bankers, becoming patrons of major works in Florence, such as Santa Trinita bridge and the Basilica of Santo Spirito.Frescobaldi embodies the essence of Tuscany, its extraordinary vocation for viticulture and the diversity of its territories.Frescobaldi’s uniqueness stems precisely from the representation of Toscana diversity, from its estates and from wines which express a kaleidoscope of aromas and sensations, springing from the characteristics of each individual terroir. The Estates are positioned in prime areas of Tuscany and each tells its own story, made up of nature, terroir and people.