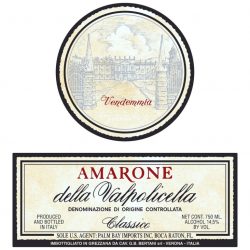 Located near Verona in the province of Veneto in northeast Italy, Casa Vinicola Bertani is one of the region’s most important and influential wine producers. Bertani produces a full spectrum of the classic wines of the Veneto and has enjoyed a reputation for quality from the start.

Prosperous wine merchants who believed that quality winemaking held the key to the future, the Bertanis invested their funds in buying some of the finest vineyards in the province and making their own wines. Consequently, unlike many other local producers, Bertani owns its own vineyards and so is able to oversee the entire winemaking cycle from start to finish. Recognition and success followed swiftly as Bertani became one of the first Veronese producers to export its wines on a significant scale. In the early years Bertani spearheaded a campaign to underscore the potential of Verona’s Valpolicella Valpantena wine district. The release of its Secco-Bertani Valpantena brand, still in production over 150 years later, is responsible for putting this DOC on the map. The late 1950s saw Bertani take center stage again, with the launch of a new-style Recioto della Valpolicella. Through the introduction of longer aging techniques, this traditionally sweet or sparkling red wine was dramatically transformed into the dry, opulent red we know today as Amarone, one of Italy’s most revered red wines.